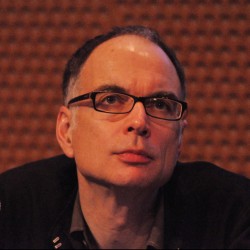 Ken Wissoker is the Editorial Director of Duke University Press, acquiring books in anthropology, cultural studies, and social theory; globalization and post-colonial theory; Asian, African, and American studies; music, film and television; race, gender and sexuality, and other areas in the humanities, social sciences, media, and the arts.  He moved to Durham to join the Press as an Acquisitions Editor in 1991; became Editor-in-Chief in 1997, before being named Editorial Director in 2005.  Wissoker is the author of the recent Cinema Journal essay “The Future of the Book as a Media Project and the earlier Chronicle of Higher Education articles “Scholarly Monographs Are Flourishing, Not Dying” and “Negotiating a Passage between Disciplinary Borders” the latter of which was later reprinted with responses from five social scientists in the Social Science Research Council newsletter, Items and Issues.  A three-part interview with him by Adeline Koh appeared in April 2013 on the Prof. Hacker blog.

Publication in the humanities and social sciences isn’t the reporting of research. It’s the production of a compelling argument, based on a combination of research and interpretation.