Economists have compared the gross domestic product (GDP) to heat — it doesn’t measure the amount of money in a system, but rather the rate of spending and exchange. The higher the rate of exchange, the higher the GDP. Goods don’t have to be manufactured for the GDP to be positively affected.

As an example, consider a patient dying of a common disease. The physicians, nurses, and others caring for them; the equipment depleted and reordered; and the insurance, social, and financial services leveraged — all contribute positively to the GDP. They trigger spending.

Financial gurus like Alan Greenspan sought to avoid volatility in the economy by moderating spending and inflation — basically, keeping the room warm by adjusting the thermostat. A steady heat was the goal.

David Beckworth has an interesting post and graphic showing how this policy resulted in a fairly tight set of fluctuations (modest inflation and modest recessions), except for the 2008-09 downturn, which has put us in the GDP freezer. 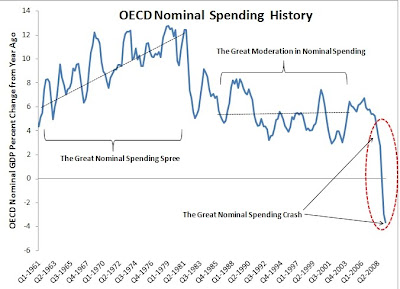 It’s a reminder of how dramatic the economic freeze has been, in both severity and speed. Companies, individuals, and states froze spending, driving us further down as money was treated not as temperature but as materials.

Stimulus spending may heat the room again. Let’s hope so.