Last month, I had the honor of hearing a keynote address from Mikaela Jade, founder of Indigital, who opened the 82nd annual meeting of the Association for Information Science and Technology (ASIS&T) in Melbourne, Australia. Jade shared the story of discovering her heritage as a member of the Cabrogal tribe, hailing from the Sydney area, and coming to partner with Microsoft and HoloLens to create a free mixed-reality app that brings ancient stories to life — supporting the oral history torch-passing among indigenous peoples across Australia. I found Jade’s keynote to be a powerful reminder of a simple premise easily forgotten in the fast-moving world of publishing innovations: You are not your user.

Jade and her story of innovation were full of potent lessons. Most impressive to me was the way in which Microsoft and other Indigital partners made the progressive move of entering into this educational project in listening mode. Instead of imposing privileged, western assumptions about digital solutions for the needs of under-represented populations, for instance those from the Kakadu region, tech providers suspended their own perspectives long enough to explore what would make a measurable difference to indigenous communities themselves. As Jade explains it, a pressing need for many aboriginal peoples is recording and sharing their oral histories with younger generations – and this information need is the explicit focus of the Indigital mobile app.

The app is not geared to educate external populations about Australian aboriginal people or achieve an externally defined end-goal. Instead, its purpose is to engage new generations of indigenous people in their ancient narratives, bringing augmented and mixed reality software to overlay mythological stories and characters on physical places and to bring printed assets to life during bespoke community events. Rather than presuming the app must be comprehensible and usable to all groups, the investment here is focused on an explicit, contextualized information need, situated in a meaningful context for this specific group of people. Jade brought sample cards to the conference, so attendees could download the app and get a sense of how young people would interact with the artful story coming to life in the palm of their hands – however, most users without this background and instructional support, would not find value in the app on its own.

In large part, Jade’s launch of Indigital and her inspiration to enliven the legends of aboriginal peoples through technology is driven by her own experiences. Jade was in her early 20s when she discovered her Cabrogal lineage and struggled to connect with the meaning and history behind her new identity. In her journey to understand her people, she realized there were cultural and technological barriers to instilling these stories with their progenies.

Jade’s message as the opening address of the ASIS&T meeting struck me as an intended wake-up call for information practitioners of all stripes, a reminder of how easy it is to impose one’s worldview on others in the course of our work. This unconscious act is especially critical for those of us in publishing and systems design to be mindful of, lest we enforce a dangerously simplified abstraction of “the user” upon our consumers – or, in the scholarly communications industry, a generic researcher, author, editor, librarian, etc.

This realization, dear reader, is not one I share with pointed finger from a place of innocence. In fact, listening to Jade’s story, I became aware of ways in which I have been guilty of the almost instinctual imposition of my perspective on the profiles of users within my own R&D projects. Despite knowing the methodological best practice of examining our assumptions and developing user personas from evidence, I know I am not alone in encountering initiatives under time-line or budgetary pressures to embrace strategies that skip these steps and operate on thinly supported (or, at worst, biased) assumptions about the needs and outlooks of our intended consumer. The Indigital story can be a morality tale for app designers and technological program managers, a reminder that we will build our biases into software if we’re not mindful of our operational assumptions.

In her keynote, Jade spoke of the need for self-determination to be built into our standard practices in development of products and services for any community. She championed the concept of co-development in information systems design, whereby the intended audience or consumer is a key player in the vision for software solutions – a theme that ran throughout the ASIS&T conference. In telling her story of Indigital, Jade called on the audience to question our prevailing assumptions – in particular, calling into question the proper ownership of both regional or historical artifacts as well as digital assets and modern solutions to preserve and extend these ancient precursors. As an example, Jade promoted the Amazonian code bank initiative, which aims to ensure scientific knowledge and territorial controls remain with indigenous communities that have long been stewards of our globe’s precious resources – and, possibly, the most useful blockchain application I’ve come across yet!

Funded by a combination of charitable contributions, client-based tech development, merchandise, and other projects, Indigital is one in a growing number of start-ups with an equal focus on having a positive impact on social issues of passion as well as achieving economic sustainability. Indigital’s advocacy for indigenous digital rights and their reinvestment of profits in Australian communities (the site notes 50% of profits are returned to aboriginal people) demonstrates this commitment. In our industry, a great deal of attention has been paid recently to demands for greater inclusion of diverse voices and populations in scholarly publishing and the research lifecycle. The Inidigital story underscores the social, economic, and political drivers for this movement.

In retrospect, Jade’s opening keynote was consistent with a theme throughout the ASIS&T meeting, which featured a clear drumbeat for more holistic approaches to addressing myriad information needs and extending information science research to embrace a range of human experiences. These approaches challenge us to question our assumptions and accept multiple valid realities. Jade’s message tracks with other celebrated voices advocating for social justice in information systems and tech development — from exposing power imbalances written into dominant search algorithms to challenging us to build diversity and inclusion into our very way of doing business. Does Indigital represent a new type of tech startup? What else might we learn from Mikaela Jade’s message and Indigital’s successes? 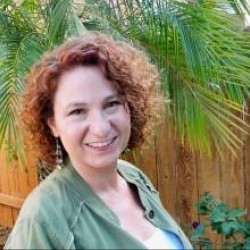 Lettie Y. Conrad, Ph.D., is an independent researcher and consultant, leveraging a variety of R&D methods to drive product strategy and evidence-based decisions. Lettie's specialties sit at the intersection of information experience and digital product design. As VP and Lead Analyst for scholarly communications at Outsell, Inc., Lettie is bringing more than 20 years' industry experience to information, data, and analytics providers. She also serves as Senior Advisor to DeepDyve, Product & UX Consultant to LibLynx, and North American Editor for Learned Publishing. Why Clouds Don't Fall Out of the Sky