Coming in September, according to a story in the New York Times, the first e-ink magazine cover will grace our newsstands. Esquire has designed an e-ink cover that will flash the words, “The 21st Century Begins Now” from an e-ink display attached to the cover. 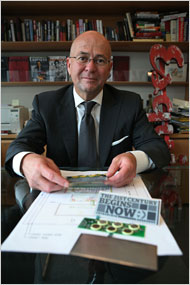 The president of E-Ink has also forecasted that commercial e-ink newspapers will be big by the end of 2009.

The Esquire cover will last about 90 days before the little battery in the unit gives up the ghost.

When will the first e-ink scholarly journal appear?

Will the format of binding articles in glued bundles have largely disappeared by the time it does?

Perhaps, Esquire‘s marketing department should take a deeper look at what the 21st century bodes. It probably isn’t an electronic newsstand.

Haven’t they heard of the Kindle?